David Swift was an English actor.

Born in Liverpool, Lancashire, he found early success as a businessman before making his stage debut in 1963 and his television debut in Compact the following year. He made several film appearances, including as Montclair in The Day of the Jackal, and gained acclaim for his portrayal of Frank Doel in 84, Charing Cross Road.

Swift made a number of television appearances, including on Rising Damp, Born and Bred and perhaps most memorably as the lovably irascible newsreader Henry Davenport in Drop the Dead Donkey. He also provided the voice of God in Old Harry's Game.

Swift made his sole singing performances in Drop the Dead Donkey, singing snippets of "If I Were a Rich Man" and "Going to Barbados" amongst others. 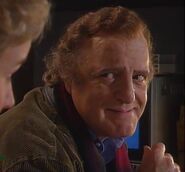