Danny Sewell was a British actor and boxer.

Born in London, England, Sewell became a professional and undefeated boxer at the age of sixteen, until a bout of polio ended his career. He made his television debut in 1959 and made a number of other appearances before his most enduring role as Bill Sikes in Oliver!

After this, Sewell also appeared in The Elephant Man and Equus, before gaining an Obie for his role as Joey in the 1971 production of The Homecoming. He also appeared in the films Partners in Crime and Man at the Top.

Sewell passed away in 2001. His brother was fellow actor George Sewell.

Sewell made his sole singing role in both the West End and Broadway casts of Oliver!, in which he speak-sings the role of Bill Sikes. 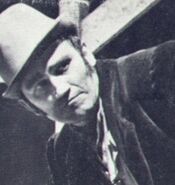 Bill Sikes in Oliver!
Add a photo to this gallery
Retrieved from "https://goldenthroats.fandom.com/wiki/Danny_Sewell?oldid=48183"
Community content is available under CC-BY-SA unless otherwise noted.