Cristy Candler is an American actress.

Principally a musical theatre actress, Candler also appeared in the short Return to the Doghouse and an episode of American Dad!

Candler is best known for her performances in Wicked, originating the role of Melena Thropp (the Witch's Mother) and later playing the role of Nessarose. She also appeared as Betty in Chicago and Regina and Justice in Rock of Ages.

Candler also appeared in a number of off-Broadway musicals including Busker Alley (as Betty) and Miss Kim, where she originated the role of Kimberley. 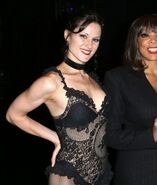 Annie in Chicago.
Add a photo to this gallery
Retrieved from "https://goldenthroats.fandom.com/wiki/Cristy_Candler?oldid=44826"
Community content is available under CC-BY-SA unless otherwise noted.