Christopher Plummer was a Canadian actor.

Born Arthur Plummer in Toronto, Ontario, Plummer studied with the Canadian Repertory Company and after several years made his Broadway debut, earning his first Tony nomination for J.B. He soon became internationally well-known for his role as Captain Von Trapp in The Sound of Music and would appear in films as varied as The Man Who Would Be King and The Return of the Pink Panther whilst continuing his theatrical career with titular roles in Macbeth and Richard III.

Plummer consistently continued to act, playing Prospero in a filmed production of The Tempest, earning an Academy Award nomination for his performance as Leo Tolstoy in The Last Station, and working as a voice actor, playing the explorer Charles Muntz in Up and the elder "1" in 9.

Plummer's best known singing role was Captain Von Trapp in The Sound of Music, and though he was later dubbed over by Bill Lee, footage of Plummer still exists.

However, Plummer used his bass voice in other films (frequently animated), such as An American Tail, where provided the voice of Henri, Rock-a-Doodle, in which he played the Grand Duke, and Babes in Toyland, where he speaks and sings "A Crooked Man". He also made the live action film Lucky Break, where he performs "Enjoy Yourself". 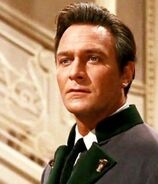 Captain Von Trapp in The Sound of Music. 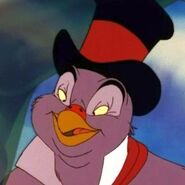 Henri in An American Tail. 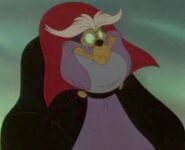 The Grand Duke in Rock-a-Doodle. 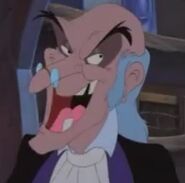 Barnaby Crookedman in Babes in Toyland. 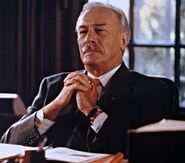 Graham Mortimer in Lucky Break.
Add a photo to this gallery
Retrieved from "https://goldenthroats.fandom.com/wiki/Christopher_Plummer?oldid=53623"
Community content is available under CC-BY-SA unless otherwise noted.