Candy Candido was an American actor.

Born Jonathan Candido in New Orleans, Louisiana, he began his musical career as a bass player and was a member of Ted Fio Rito's big band. He soon became an actor and was popular for his wide vocal range, which made a name for him on The Jimmy Durante Show.

Candido appeared in a number of animated features for Disney, most notably as the Indian Chief in Peter Pan and Fidget the Bat in The Great Mouse Detective. He also made uncredited cameos in a number of films, including The Wizard of Oz.

Candido's ability to switch octaves from a high falsetto to a deep bass made him popular for voiceover parts where he would frequently sing in an impressive bass. He performed in a number of productions as a musician, such as Star Night at the Cocoanut Grove and Rhythm Parade.

Candido also performed in character on occasion; explaining "What Made the Red Man Red?" in Peter Pan, and as the Awful DYNN in The Phantom Tollbooth. He recorded a comedy single with Jimmy Durante named for his catchphrase "I'm Feelin' Mighty Low", as well as two childrens records. 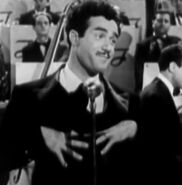 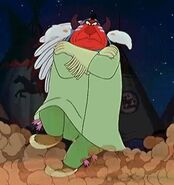 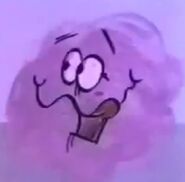 The Awful DYNN in The Phantom Tollbooth.
Add a photo to this gallery
Retrieved from "https://goldenthroats.fandom.com/wiki/Candy_Candido?oldid=45841"
Community content is available under CC-BY-SA unless otherwise noted.