Sweeney Todd: The Demon Barber of Fleet Street as Beadle Bamford
Cats as Old Deuteronomy
The Phantom of the Opera as Richard Firmin
Cheers as Baritone
The Pirates of Penzance
The Griffin and the Minor Canon as the Mayor
Man of La Mancha as the Padre
Oliver! as Mr. Bumble
Shrek (film soundtrack) as Merry Man

Calvin Remsberg is an American actor and director.

Beginning his career as an opera singer before moving on to straight musicals, Remsberg later became a director, notably directing four productions of Sweeney Todd: The Demon Barber of Fleet Street. Many of the shows he directed were ones he had previously starred in.

Remsberg also directed, co-produced and helped finance the show F*cking Men. He has made numerous television appearances in various series such as The X-Files and films such as Pretty Woman, which was his motion picture debut.

Remsberg trained to be an opera singer, but ultimately became a musical theatre actor, gaining the role of the Beadle in Sweeney Todd:The Demon Barber of Fleet Street when his friend Jack Eric Williams (who originated the role) did not feel up to a touring production.

Remsberg also appeared in US tours of Cats and The Phantom of the Opera playing Old Deuteronomy and Monsieur Firmin respectively.

He made a singing guest appearance in the sitcom Cheers and originated the role of the Mayor in The Griffin and the Minor Canon. Remsberg was also praised for his later comic roles as the Padre in Man of La Mancha and the greedy Beadle Bumble in Oliver!. He would also lend his voice to Shrek, playing one of Robin Hood's singing, dancing merry men.

The Phantom of the Opera

The Pirates of Penzance

The Griffin and the Minor Canon (originated the role) 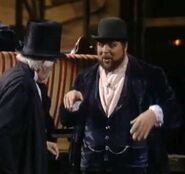 Beadle Bamford in Sweeney Todd: The Demon Barber of Fleet Street.
Add a photo to this gallery
Retrieved from "https://goldenthroats.fandom.com/wiki/Calvin_Remsberg?oldid=53740"
Community content is available under CC-BY-SA unless otherwise noted.