Buster Keaton was an American actor, director and comedian.

Born Joseph Keaton in Piqua, Kansas to a vaudevillian family, Keaton worked as a child performer before moving into film, making his debut in Roscoe "Fatty" Arbuckle's The Butcher Boy. Success would lead to him gaining his own production company, creating such films as Steamboat Bill Jr. and The General. He was well known for performing many dangerous stunts by himself.

Keaton eventually moved into "talkies", often featuring in various cameos such as Around the World in 80 Days and It's a Mad, Mad, Mad, Mad, World as well as starring opposite his silent rival Charlie Chaplin in Limelight.

Keaton did not sing often, but did perform a few fragments of songs whilst portraying his character Elmer Butts, including "Oh, King, Oh Queen" (in Free and Easy) and "So Long Elmer" in Grand Slam Opera.

In 1960 Keaton would go on to play The King in Once Upon a Mattress, his sole role in a stage musical. His final film role was as Erronius in A Funny Thing Happened on the Way to the Forum.

Elmer Butts in Free and Easy. 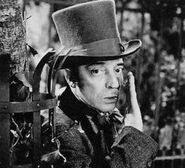 William Dalton in The Villain Still Pursued Her. 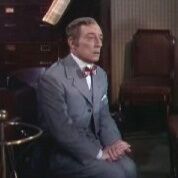 Hickey in In the Good Old Summertime. 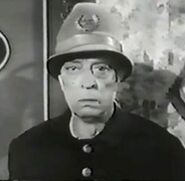 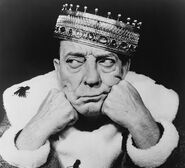 The King in Once Upon a Mattress. 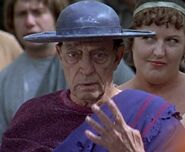 Erronius in A Funny Thing Happened on the Way to the Forum.
Community content is available under CC-BY-SA unless otherwise noted.
Advertisement