Bruce Adler was an American actor.

Born in New York City, Adler made his stage debut alongside his parents at such venues as the London Palladium before making a name for himself as an adult, making his Broadway debut in 1979. In 1991, he won the Drama Desk Award for Those Were the Days.

Adler also appeared in a number of one man shows, in which he sang, danced and told jokes mimicking the entertainers of the Forties and Fifties.

Adler made his musical debut alongside his father Julius in Kosher Widow aged fourteen, and made an appearance in the musical play Go Fight City Hall before appearing such shows as Oklahoma! (as Ali Hakim), Fiddler on the Roof (as Motel) and Sunday in the Park With George (as Franz).

Adler also originated several roles, including Danny in Good Luck and Bela Zangler in Crazy For You, voiced The Peddler in the Aladdin series, as well as releasing a comedy/music album An Evening at the Yiddish Theatre.

An Evening at the Yiddish Theatre (1991) 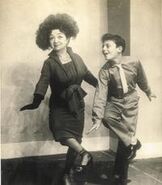 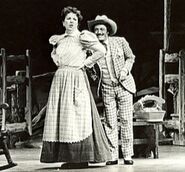 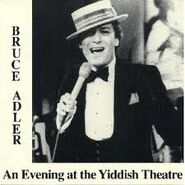 An Evening at the Yiddish Theatre.

The Peddler in Aladdin and the King of Thieves. 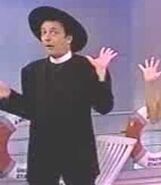 Moonface Martin in Anything Goes.

Policy Pinkie in The New Red, Hot and Blue!
Add a photo to this gallery
Retrieved from "https://goldenthroats.fandom.com/wiki/Bruce_Adler?oldid=45532"
Community content is available under CC-BY-SA unless otherwise noted.