Jubalay (originated the role)
The Pirates of Penzance as The Pirate King (video)
Kiss of the Spider Woman as Luis Alberto Molina (originated the role)
Parade as Leo Frank (original Broadway cast)
My Life With Albertine as The Narrator/Older Marceau
The Lord of the Rings: The Musical as Gandalf (original cast)
Jesus Christ Superstar as Pontius Pilate

Brent Carver was a Canadian actor.

Born in Cranbrook, Canada, Carver left his studies to join the Vancouver Arts Club, before appearing in several television productions, his first major success being the titular Leo in Leo and Me.

Carver also appeared in a number of film roles, including Elizabeth Rex and The Legend of Sleepy Hollow (in which he played Ichabod Crane). He also starred in a 2014 stage and film version of Romeo and Juliet with Orlando Bloom as Romeo, playing the role of Friar Laurence.

Carver made his first musical appearance in the revue Jubalay, but it was for his role as Luis Molina in Kiss of the Spider Woman that he first gained major recognition and won a Tony Award for Best Actor in a Musical. He also played the main role of Leo Franks in Parade, and Tevye in the Canada Fest's production of Fiddler on the Roof.

In 2006 Carver played Gandalf in the world premiere of The Lord of the Rings: The Musical in Toronto, and Pontius Pilate in the 2012 revival of Jesus Christ Superstar.

Kiss of the Spider Woman (1992)(originated the role)

My Life With Albertine (2003)(originated the role)

The Lord of the Rings: The Musical (2006)(originated the role) 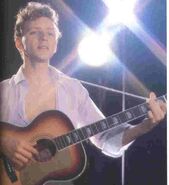 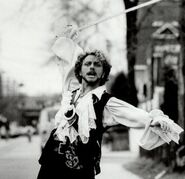 The Pirate King in The Pirates of Penzance. 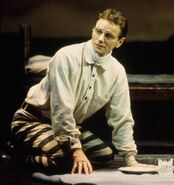 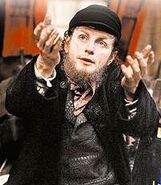 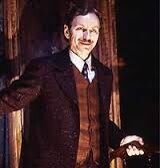 The Narrator in My Life With Albertine. 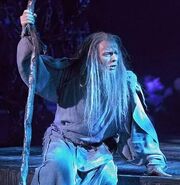 Gandalf in The Lord of the Rings: The Musical. 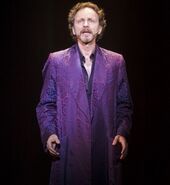 Pontius Pilate in Jesus Christ Superstar.
Add a photo to this gallery
Retrieved from "https://goldenthroats.fandom.com/wiki/Brent_Carver?oldid=52921"
Community content is available under CC-BY-SA unless otherwise noted.