Bob Zolli is an American actor.

Zolli has appeared in stage musicals, notably originating the role of Sir Archibald Proops in Jekyll & Hyde at the Alley Theatre. He also played the role of the Space Punk in the original Broadway cast of Starmites. 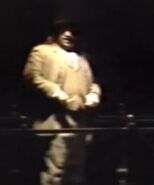 Sir Archibald Proops in Jekyll & Hyde.
Add a photo to this gallery
Retrieved from "https://goldenthroats.fandom.com/wiki/Bob_Zolli?oldid=45287"
Community content is available under CC-BY-SA unless otherwise noted.