Bob Wrenn is an American actor.

Wrenn appeared in a number of stage musicals, beginning with supporting roles in regional productions and the national tour of Anything Goes, before originating the role of General Lord Glossop in the Alley Theatre Premiere of Jekyll & Hyde (later playing the smaller role of Hugo Carruthers in the touring production). He also played the role of Fred in Oklahoma! and understudied several other roles. 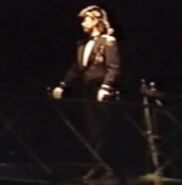 General Lord Glossop in Jekyll & Hyde.
Add a photo to this gallery
Retrieved from "https://goldenthroats.fandom.com/wiki/Bob_Wrenn?oldid=43957"
Community content is available under CC-BY-SA unless otherwise noted.