Alice in Wonderland as The White Rabbit/Dodo
Peter Pan as Mr. Smee
Lady and the Tramp as Jock/Joe/Bull/Policeman
In the Bag as Ranger J. Audubon Woodlore
Sleeping Beauty as King Hubert
The Aristocats as Uncle Waldo

Bill Thompson was an American actor and voice performer.

Born in Terre Haute, Indiana to vaudevillian parents, Thompson began his career in Chicago radio, gaining early recognition in The Breakfast Club (in which he originated the character of Wallace Wimple) and Fibber McGee and Molly. He soon became instantly recognisable as the original voice of Tex Avery's Droopy Dog.

After a stint in the U.S. Navy, Thompson became a character actor with Disney, with numerous feature films, as well as the part of Scrooge McDuck in his first feature.

Thompson died shortly after his 58th birthday, after the release of his final film, The Aristocats, in 1970.

Thompson's voiceover work for Disney frequently called on him to sing; beginning with his dual as The White Rabbit and The Dodo in Alice in Wonderland and continuing through such classics as Peter Pan and Lady and the Tramp (where he sings a section of "Bella Notte").

Though Thompson's Disney characters rarely had any solos after Alice in Wonderland, they still featured prominently, and indeed Thompson's last line on film is sung, as part of the reprise of "Ev'rybody Wants to Be a Cat" in The Aristocats. 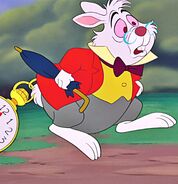 The White Rabbit in Alice in Wonderland.

The Dodo in Alice in Wonderland. 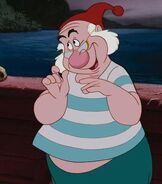 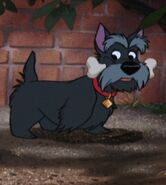 Jock in Lady and the Tramp.

Ranger J. Audubon Woodlore in In the Bag. 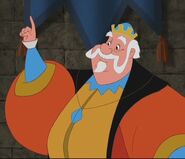 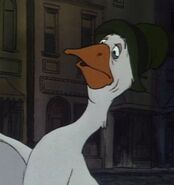 Uncle Waldo in The Aristocats.
Add a photo to this gallery
Retrieved from "https://goldenthroats.fandom.com/wiki/Bill_Thompson?oldid=51367"
Community content is available under CC-BY-SA unless otherwise noted.