All American as Various Roles
Around the World in Eighty Days as Bartender
How Now, Dow Jones as Bradbury
South Pacific as Luther Billis
Promises, Promises as Jesse Vanderhof, Dr. Dreyfus (understudy)
The Fantasticks as Hucklebee
Chicago as Amos Hart (original Broadway cast)
The Music Man as Marcellus Washburn

Barney Martin was an American actor.

Born in Queens, New York, Martin was an Air Force officer, a policeman and a comedian before becoming an actor, playing Goerring in the "Springtime for Hitler" play within The Producers. He went on to appear in a number of films, including both Arthur films.

Martin was best known, however, for his various roles on television, most notably Seinfeld (as Morty Seinfeld) and various guest roles on The Tony Randall Show and Daddy Dearest.

Martin sang in a number of Broadway musicals, initially in small comic roles, and in touring and revival productions such as playing Luther Billis in South Pacific and Hucklebee in The Fantasticks. However, he did originate a major role on Broadway, playing Amos Hart in Chicago.

All American (1962)(originated the role)

Around the World in Eighty Days (1964)(originated the role) 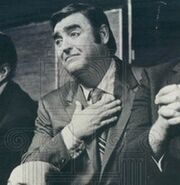 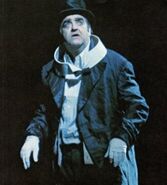 Amos Hart in Chicago.
Add a photo to this gallery
Retrieved from "https://goldenthroats.fandom.com/wiki/Barney_Martin?oldid=52193"
Community content is available under CC-BY-SA unless otherwise noted.