Born in Vicenza, Veneta, Adams began her career as a dancer and performer at Boulder's Dinner Theatre, before being cast in her first film with Drop Dead Gorgeous. Adams soon began to be cast in a number of television series such as Buffy the Vampire Slayer and received her breakthrough film with Disney's Enchanted.

Following her breakthrough, Adams made a number of acclaimed appearances, as a nun in Doubt, The Master and in the Award nominated biopic Big Eyes.

Adams has sung several times on the soundtrack of her films, notably in her breakout role in Enchanted, and played a singer in both Miss Pettigrew Lives For a Day and Moonlight Serenade. She also performed several numbers on the soundtrack of The Muppets and in 2012 appeared in the Shakespeare in the Park production of Into the Woods.

Delysia La Fosse in Miss Pettigrew Lives For a Day. 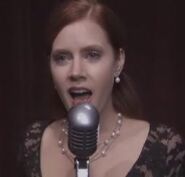 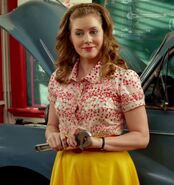 Mary in The Muppets.

Baker's Wife in Into the Woods.
Community content is available under CC-BY-SA unless otherwise noted.
Advertisement