Amrish Puri was an Indian actor.

Born in Lahore, Jalandhar Punjab, he failed an initial screen test and instead began working at the Prithvi Theatre, gaining wide acclaim as a theatrical performer. During the 1970s, he appeared as the villain in the Bollywood film Hum Paanch and went on to have further success as villains in productions such as Shakti and Hero.

Puri received wider recognition abroad following his roles as khan in Gandhi and the malevolent high priest Mola Ram in Indiana Jones and the Temple of Doom. He went on to appear in films such as Karan Arjun, Chachi 420 and China Gate. 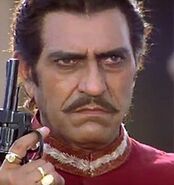 General Dong in Tahalka.
Add a photo to this gallery
Retrieved from "https://goldenthroats.fandom.com/wiki/Amrish_Puri?oldid=47651"
Community content is available under CC-BY-SA unless otherwise noted.