America Ferrera is an American actress.

Born in Los Angeles, California, she initially worked in community theatre before taking minor films in Gotta Kick It Up! and Real Women Have Curves before the successful The Sisterhood of the Travelling Pants. Ferrera's greatest early success however, came in playing Betty Suarez in the television series Ugly Betty.

Ferrera also provided the voice of Astrid in How to Train Your Dragon, and appeared in both the telenovela Pedro & Maria and the series Superstore, where she also worked as co-producer.

Ferrera sang several times onscreen, including in her leading role as Betty Suarez in Ugly Betty, but also appeared onstage as Roxie Hart in Chicago. 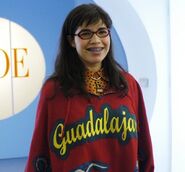 Hedy in It's a Disaster.
Add a photo to this gallery
Retrieved from "https://goldenthroats.fandom.com/wiki/America_Ferrera?oldid=44894"
Community content is available under CC-BY-SA unless otherwise noted.