Alun Armstrong is an English actor.

Born in Arnfield Plain, Durham, Armstrong became an actor after initially working as a bricklayer and gravedigger. His career took off in the 70s with his film debut in Get Carter, and he also appeared on stage several times, notably as Touchstone in As You Like It and Dogberry in Much Ado About Nothing.

Armstrong commonly appeared in crime dramas on television, such as Garrow's Law, as well as various adaptations of the works of Charles Dickens, including four BBC productions and two versions of Oliver Twist.

During his time at the Royal Shakespeare Company, Armstrong was one of three members to successfully audition for Les Misérables (the others being Roger Allam and Susan Jane Tanner) and originated the role of Thénardier, which he later reprised in the 1995 "Dream Cast" Anniversary Concert. He won an Olivier Award for playing the titular role in Sweeney Todd: The Demon Barber of Fleet Street.

Onscreen, Armstrong's singing was limited to singing "Jaws" in the series New Tricks, in which he played the major role of Brian Lane. In 2010 he sang "One Day More" in the encore of Les Misérables' 25th Anniversary Concert. 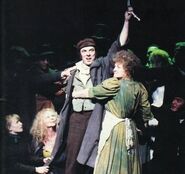 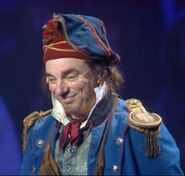 Brian Lane in New Tricks.
Add a photo to this gallery
Retrieved from "https://goldenthroats.fandom.com/wiki/Alun_Armstrong?oldid=45409"
Community content is available under CC-BY-SA unless otherwise noted.