Alexis Smith was an American actress.

Born Margaret Smith in Penticton, British Columbia, she made her stage debut as a ballet dancer at the Hollywood Bowl before being spotted by Warner Brothers, which led to leads in such roles as Dive Bomber and The Constant Nymph. She also appeared in such films as The Two Mrs. Carrolls, Of Human Bondage and Here Comes the Groom.

Spending much of her career onstage, Smith returned to the screen with such films as Once is Not Enough, Tough Guys and The Age of Innocence as well as having a regular television role as Lady Jessica Montford in Dallas.

Though she was often dubbed for her singing roles in films (save for The Doughgirls and Montana) she appeared in a number of stage musicals, notably originating the role of Phyllis Rogers Stone in Follies and Lila Halliday in Platinum.

Smith would also appear in The Best Little Whorehouse in Texas as Miss Mona, Pal Joey as Vera, and Clarissa in the 1989 production of Nymph Errant.

The Best Little Whorehouse in Texas (1979) 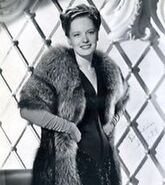 Nan Curtiss Dillon in The Doughgirls. 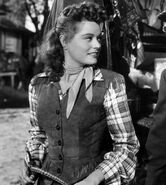 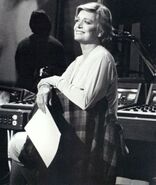 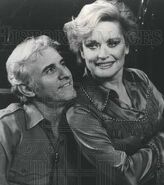 Miss Mona in The Best Little Whorehouse in Texas.
Add a photo to this gallery
Retrieved from "https://goldenthroats.fandom.com/wiki/Alexis_Smith?oldid=45237"
Community content is available under CC-BY-SA unless otherwise noted.