Guys and Dolls as Ensemble
Joseph and the Amazing Technicolor Dreamcoat as Asher
Truly, Madly, Deeply as Jamie
Help! I'm a Fish as Joe
Private Lives as Elyot Chase
Sweeney Todd: The Demon Barber of Fleet Street as Judge Turpin

Alan Rickman was a British film, television and stage actor known for his complex and frequently antagonistic characters, though he was frequently seen in comic roles too.

Born in Hammersmith, London, Rickman attended RADA and gained his breakout role onstage 1985 as the Vicomte de Valmont in Les Liasons Dangereuses. This led to him being cast as the suave German master thief Hans Gruber in Die Hard, which won him recognition across the world and led to several other antagonistic roles, including the Sheriff of Nottingham and Severus Snape in the Harry Potter series.

In later years Rickman also made appearances in comedies, usually as a straight foil to the more "wacky" surroundings such as Sir Alexander Dane in Galaxy Quest and Metatron the sarcastic archangel in Dogma. In 2011 he won critical acclaim in the Broadway play Seminar, for which he won several awards.

Rickman can first be heard singing in the Anthony Minghella film Truly, Madly, Deeply where he performs "The Sun Ain't Gonna Shine Anymore" and "Raining in My Heart". He later appeared in the English language dub of Help! I'm a Fish, where his character Joe entices his fellow sea life to drink a potion giving them "Intelligence". Rickman has also sung on stage too; in musicals and duetting with Lindsay Duncan in Private Lives.

However, his largest singing role was in Sweeney Todd: The Demon Barber of Fleet Street, in which he portrays Todd's nemesis Judge Turpin.

Joseph and the Amazing Technicolor Dreamcoat (1976)

Ensemble in Guys and Dolls. 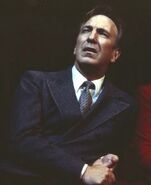