Adam Wylie is an American actor.

Born in San Dimas, California, he made his acting debut at the age of four doing advertising, before becoming a voice actor, appearing in such productions as Hey Arnold! on television and The King and I where he portrayed Louis Leonowens.

Wylie also did a great deal of live action work, beginning with the film Child's Play 2 and Kindergarten Cop, continuing to act frequently on television and in films upon growing up, making appearances in CSI: Miami and American Pie 5: Band Camp among others.

Wylie sang in a number of his animated roles as a child actor, most prominently as David in All Dogs Go to Heaven 2, where he sang "On Easy Street". He also briefly performed in two television appearances in The Gilmore Girls and Malcolm in the Middle respectively.

Wylie later developed a stage career, appearing as Jack in a succesful Broadway revival of Into the Woods, and later Leo Bloom in The Producers. 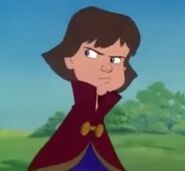 Young Derek in The Swan Princess. 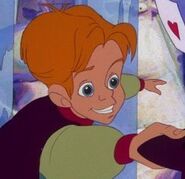 David in All Dogs Go to Heaven 2. 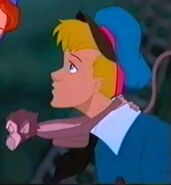 Louis Leonowens in The King and I. 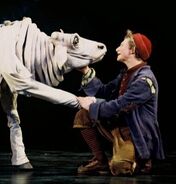 The Cow and Jack in Into the Woods. 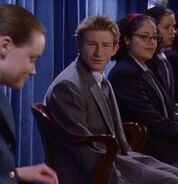 Brad in The Gilmore Girls.

Boq in Wicked.
Add a photo to this gallery
Retrieved from "https://goldenthroats.fandom.com/wiki/Adam_Wylie?oldid=41477"
Community content is available under CC-BY-SA unless otherwise noted.